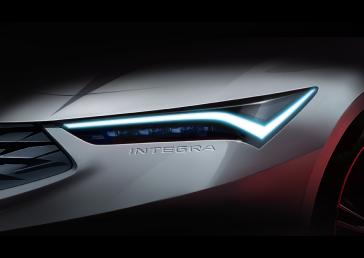 Acura today announced the return of the Integra during its annual appearance at Monterey Car Week.

I don't think the Integra has ever been about speed or power, just a nice little fun-to-drive car.

Edit: I like that they intro'd it in "American Racing Yellow" (my description).

I imagine the 10-spd is also a lot more expensive than the CVT. At least Honda does a decent CVT. Still, there are many buyers out there who'd take an old AT5 instead of a CVT, except Honda doesn't make those anymore.

The 6MT will make many happy.
L

zroger73 said:
I hate PR stunts. This was no "leak" - Toyota did this one purpose. I hate it even more when they actually work. I had no idea this vehicle was coming.

Nearly as much HP from a 1.6L I3 that Honda gets from a 2.0L I4? Interesting. That's more HP per litre than a Ford GT or Bugatti Chiron. Will some of that HP be from an electric motor?

I DO like the sound of an I3 engine, though! I'd like to see Honda's turbocharged 1.0L I3 as the base engine in the new HR-V that will be revealed in a few days.
Click to expand...

blaze741 said:
Any love for the new Integra now that it's out?

Always looking for a replacement for my MK7 GTI I regret selling. Won't buy the new gen due to the touch buttons...

The new Integra is appealing to me being a 5-door. I can use it like a hatch. Decent price at under 40k.
Click to expand...

I like it. Seems like a great replacement for my 2002 Accord coupe that I traded for the Ridgeline. If this was a booming economy and I had a lot of play money, I'd be interested. Biggest caveat is my wife won't drive a stick.

By the time the economy bounces back, this car will probably be discontinued (maybe one can get a deal on the final year model).

A lot of folks say it's just a Civic in a different dress, but that's kinda what the old Integras were... I'd have to test-drive one.
L

Hi everyone, thanks for having me! My name is Jonathon Rivers, the Lead Product Planner for the 5th Generation Acura Integra. I've been with the company for +12 years and have worked on a number of exciting products including NC1 NSX and TLX Type S, but none of them compare to the experience...

Cbayman said:
Most encouraging news from the Integra launch is the demand for the 6 speed. It would be cool if Acura dropped the 6 speed into the 2.0T TLX to boost sales.
Click to expand...

I recall they said something like 65% of the pre-orders requested the manual.

I suppose if the take rate on manuals was 5% across all vehicles five years ago, the dearth of available manuals nowadays has significantly increased the demand. That demand is then bolstered by folks not wanting CVT, and it seems ridiculously hard to get a decent automatic transmission nowadays.

Plus, you can't go wrong with a Honda / Acura manual transmission. It's just too bad we can't get a sweet Honda manual in the Ridgeline.... imagine no transmission complaints on the ROC!
L

zroger73 said:
100% of Civic Si's and Type R's are manual, but there are relatively few of them and there will be even fewer Integras. Sales of all three of these models combined will be less than sales of the Ridgeline. Even if the take rate for a manual in an Integra was 100% instead of 65%, that's still relatively few manuals sold. These are very niche-market vehicles. Most Miata's are manuals, too, but that model's volume is incredibly low compared to Mazda's total sales.

As much as I love to occasionally drive a vehicle with a manual transmission, I do not want another one as a daily driver. At least for me, the fun eventually wears off and it becomes an inconvenience.
Click to expand...

I guess for me it comes down to knowing you have a lightweight reliable inexpensive transmission that does exactly what you want it to do. Yes, it is more work, particularly in traffic, but the benefits still outweigh the negatives IMHO.

If all automatic transmissions performed on par with the ZF8, or I commuted in stop-n-go traffic, I might have a different attitude. That being said, i love the way my six-speed performs (outside of essentially no manual control), just hope it holds out until I'm ready to upgrade.
1 - 12 of 12 Posts
Join the discussion
Continue with Facebook
Continue with Google
or sign up with email
About this Discussion
59 Replies
20 Participants
Last post:
zroger73 2 mo ago
Honda Ridgeline Owners Club Forums
Honda Ridgeline Owners Club, forum community to discuss reviews, accessories, performance, care, mods, and more.
Full Forum Listing
Explore Our Forums
Second Generation Ridgeline (2G 2017+) 1G Problems & Issues Miscellaneous/General Honda Ridgeline Discussions Shoppin' and Test Drivin' 1G Mobile Electronics
Recommended Communities