cookin2night said:
Do you think I'm going to far?

Sent from my SM-G900V using Tapatalk
Click to expand...

Depends on how far you are hauling it!

You need to put some sideboards on that truck so you can carry a full half-cord..
L

silkiechicken said:
That's a brilliant idea! I need to find me a donkey that knows how to load! But first, to make that livestock cage.
Click to expand...

When I was a kid, we didn't have a horse trailer to haul cattle. We hauled them in the back of a pickup truck, using a cattle rack. Looked just like panels from a stake bed truck, and the panels slid right into the stake pockets. Corners bolted together, and there was a top-sliding center gate at the rear, just big enough for a cow to get through.

Dad hauled a LOT of cattle to market with that setup. Maybe cattle weren't quite as big 40 years ago!

We got a horse trailer around 1978. That was luxury! And didn't need a ramp in the chute to load cattle!

My brother updated that trailer probably around 1998 with a bigger, fancier horse trailer, made out of aluminum instead of steel, and it was a fifth-wheel. He still uses an old 1987 Dodge 3/4-ton 4x4 4-speed to pull it.

Anywayz, doubt you'll find a stake rack for the Ridgeline. Probably not too big of a market for it. A large dog kennel may work. Or one of those tiny horse trailers....
L

silkiechicken said:
I was eyeing the price conscious pickup hauler made by Premier1 and the much more pricey Pickup Popper... but have issues justifying the cost. The grown sheep don't fit in the 800 series kennel I already have. A tiny horse trailer would be awesome though! Except for the fact I suck at backing up a trailer... or just backing up without a trailer.

I've been just using my dad's silverado for which I made some rails for the sides that fit the stake pockets. Was super cheap and has worked well. Usually tie a sheep to each side and just put the ramp in the middle as it's an 8 foot bed. It would be nice to be able to do it all on my own though, as I can't drive a manual transmission.


Edit: My dad used to have a 68 chevy with 3 on the tree... yellow on the outside and a lime green interior that could be hosed out. He bought it as part of a bulk buy a farmer was doing with Chevy's. He hauled lots of air in that thing until I started making it dingy with livestock stuff when the truck was already 35 years old. lol
Click to expand...

That Premier should work for you. If you're handy, you can build your own, get the oanels from your local farm supply store, use tiny hose clamps to connect the panels together. Add a 2x4 wood superstructure if you want it heavy-duty. In lieu of hose clamps, hog rings might be strong enough if you use enough of them.

My Dad's '63 Chevy was reddish-orange, stick was on the floor. Don't remember the seat color, as he always had a blanket or something over it, guessing it was black or red. Seems I remember the dash was bare metal. Gas tank was right behind the seat. Bed of truck had a wood floor.

I think the truck is still in the windbreak behind my parents house. I'll check next time I'm up in that neck of the woods....
L

My wife has some of those round tuits... she gives me one every now and then....:frown:

hksvr4 said:
3200 lbs dry weight. Sway bar and brake controller. Towed it from Lancaster PA to Long Island. 65mph. First time towing and not a problem at all. Break controller works really well actually saved me a few times. How do I stop the break jerking at low speeds?
Click to expand...

You need to read the manual for the model of brake controller you are using. If you dont have the manual, you can usually find one online, or find YouTube vids or vids on the mfrs website, or even websites like etrailer.com.

Anyway, most good controllers have a progressive braking option. For example, on Tekonsha Prodigy models, there is a dial that you can adjust for how aggressive the trailer brakes are in relation to the vehicles brakes.

Online videos might be best at illustrating this feature and procedures for dialing it in.
L

speedlever said:
Cool. I was thinking you may have grossly overloaded your RL (not that ANYONE here would ever do such a thing!).
Click to expand...

Pran said:
It all started when I suggested we could build a garden planter out of the cedar panels from the rotting fence we were taking down. The chief engineer ran with the idea and we ended up with 3 large boxes which the CE thought needed good top soil. I'll get some delivered I advised. 'What's wrong with that expensive new truck you had to have?' was the reply. "I'm not putting dirt in the Ridgey!" I responded.
Click to expand...

Ha! I didn't load up quite as much as you did (maybe a cubic yard). Very fortunate that our city recycling center has a mountain of compost that they're giving away for free!

Pleease said:
Hauled some ugly stuff in my pretty truck this morning.
Click to expand...

Pleease said:
Yep, cleaning out in-law's garage. There were paneling scraps in there from when the basement family room was finished in 1975, and I'm not making this up.

BTW, like that cargo net - looks easier than strapping the miscellaneous stuff that tends to flop akimbo. Details? TIY
Click to expand...

Best way to load and carry a Queen Sized Mattress.

I need to buy a new queen size mattress. The outlet wants $80 to deliver it my home. Do you guys think it's possible to haul it in my RL, therefore saving me the $80 delivery fee? I believe the measurements are 80"x60". I am sure I would have to have the tailgate down in order to do this. Any...

I haven't used the plastic hooks with it yet, just the carabiners. Combined with the tie-downs in the Ridgeline bed, it's a nice solution for smaller items that you can't really tie down.
L

Looks like you could've gotten that pallet a little further forward if you had tipped up or removed the tonneau... that would've put a little less sag on the back end. Looks like it handled it well, though! 👍
L

According to all of their press materials and specifications, i have never seen 1477 anywhere except on the door jambs. Honda, being an engineering company, should have had this figured out five years ago. 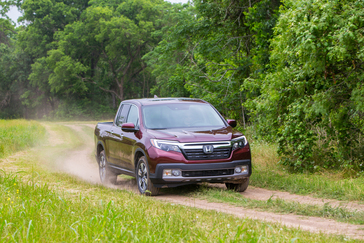 What Do you Know About TRUE Payload capacity?

Payload Capacity, G1 vs G2 Have you ever looked at YOUR trucks actual payload? Most of us know, although some may not that you can find it on the drivers side when the door is opened. I'm really interested to know what the real numbers will be for the G2. The curb weight between top and bottom...

In another post a few months back, i alluded to the change in payload possibly being attributed to the change in transmissions, although this did not show up in the 2020 models, and perhaps it took Honda a year to get their press materials straightened out. The other significant change was in the front bodywork, but we don't know what weight differences were there, either.

Since there was no change from 2019 to 2020, it is hard to imagine the 6-spd and 9-spd transmissions weigh exactly the same.

For the 2019 RTL (which i have), the big change from previous years was the moonroof and rear slider; however, the weights of those items were not reflected in the published payload ratings. Based on subsequent payload ratings from other trims in other years, we may deduce that the 2019 layload rating should be ten pounds less than the 2021 rating, thus making it 1534lbs. My 2019 RTL has the uniquitous 1477lb rating on the door. That is a 57lb discrepancy. Very sloppy for an engineering company.

To muddy the waters, i also have running boards. i really just need to go weigh my truck, then subtract that from 6019lbs to get my true payload.
L

He texts me back 2 hours later and says no, my sod is inside the building. So I run back there and he's got 6 rolls waiting on a pallet for me.

300sf sod for free. It's really not too bad. Gonna put the sprinklers to it hard over the next week amd see how much I can save.

Mjrchaos said:
New tub for the kids’ bathroom renovation. Had to unhinge my LoMax cover to give it the inch of extra space needed slide it under. Dropped the tailgate and strapped her in securely for the brief drive from Home Despot. View attachment 419118
Click to expand...